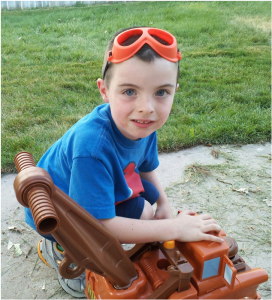 He had a spastic form of cerebral palsy, which causes stiff and difficult movement. His legs and feet were very stiff and he didn’t have any range of motion in them.

“We were told he may never walk, crawl, talk or sit without assistance,” said Brenda. “I have to say I was devastated, but I knew we had to keep strong and encourage him.”

Despite the bleak diagnosis, Logan’s fighting spirit could not be quashed and by the time he was 2, he was determined to walk. Receiving therapy for motor skills and speech, he started talking and learning to walk with the help of a walker and crutches, and then he could surprisingly walk on his tip toes from one piece of furniture to another.

While he made great strides in his development, doctors told the family that walking would continue to be difficult and he would likely need to rely on a wheelchair within the next few years.

In order to find out what more could be done, Logan was then referred to Seattle Children’s Hospital to see Dr. Susan Apkon, director of Rehabilitation Medicine and specialist in the care of children with cerebral palsy.

It was at Seattle Children’s where Apkon introduced the family to neurosurgeon Dr. Samuel Browd and the idea of a procedure called selective dorsal rhizotomy. Apkon and Browd felt Logan was a prime candidate for the procedure, which is a surgery done on the lower spinal cord where certain nerves are cut to permanently reduce spasticity in the legs. Extensive rehabilitation and physical therapy is required following surgery to increase strength and muscle control.

“Logan was now 4 years old and we knew if we were going to do this, now was the time to try and give him the best chance in life,” said Brenda.

His surgery went very well and Logan spent three weeks at Seattle Children’s going through rehabilitation, which was followed by intense physical therapy at home.

“Every day we watched Logan get stronger with all the therapists’ help and devotion, and Logan’s drive to give it his all,” said Brenda.

Three weeks after they were home from the hospital, Brenda was resting on the couch and what happened next was something she will never forget.

It is a miracle…I want other parents out there with kids like Logan to know that there is hope. Brenda Ellingsworth

Logan came over to her and said, “Mama watch! I’m going to walk!” Skeptical since it was so soon after surgery, Brenda and Randy watched in amazement as he took one step, two steps, three steps and on up to 35 steps.

“I jumped up and started cheering and crying,” said Brenda. “It is a miracle and I am so thankful to everyone who has been part of his tremendous treatment and recovery. I want other parents out there with kids like Logan to know that there is hope.”

Stepping Into the Future

Fast forward to today – Logan, now 5, continues daily physical therapy to build strength and is walking as much as he can. He is doing things he has never done before like riding his tricycle, bowling, playing miniature golf and climbing. He is always laughing and smiling and never gives up when taking on a new challenge. 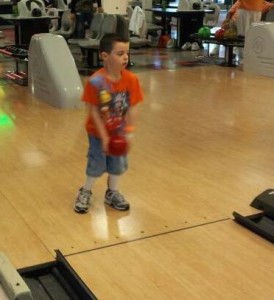 His doctors are smiling, too.

“Logan looks fantastic and I am amazed by his progress,” said Apkon. “His stride has greatly improved as his steps are much longer and he’s flatter on his feet.”

“It’s just amazing to see him come in after surgery and walk down the hall,” said Browd. “You can’t ask for a better day than that.”

Cerebral palsy (CP) is the most common developmental disability in the United States. It affects one to two children in every 1,000 born.

Spastic CP is the most common form and affects about 80% of people with CP. Selective dorsal rhizotomy (SDR) surgery is one possible treatment option. A child is a good candidate for the surgery if they are somewhat able to walk either with assistance or independently, if they have spastic diplegia where muscle stiffness is mainly in the legs, and the child and the family are able to participate in prolonged therapy following surgery.

The goal of the surgery is to maximize a child’s movement and independence by identifying and cutting the nerve fibers that are causing the abnormal tone, or stiffness. Surgery is then followed by prolonged rehabilitation and therapy in order to increase a child’s strength and muscle control, with a focus on walking.