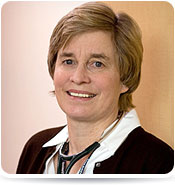 Dr. Bonnie Ramsey of Seattle Children’s Research Institute was honored today, April 18, in Washington, D.C. for her work on clinical trials of Kalydeco, a cystic fibrosis drug approved by the U.S. Food and Drug Administration (FDA) this year. She is a co-recipient of the award with Dr. Frank Accurso from the University of Colorado.

The Clinical Research Forum, a nonprofit organization that promotes understanding and support for clinical research and its impact on health and healthcare, put Dr. Ramsey’s work on a Top Ten list of outstanding clinical research projects across the country.   Some of Dr. Ramsey’s fellow award winners were behind research that:  is helping prevent complications after bone marrow transplantation; uncovered new therapies for leukemia; found that early treatment with medications can prevent HIV transmission.

Dr. Ramsey, also a professor of pediatrics at the University of Washington, has said that the development of Kalydeco, a drug to treat cystic fibrosis patients who have a certain genetic mutation, is equivalent to putting a man on the moon.  The FDA approved Kalydeco on January 31, 2012.  We cover the high points of recent interviews with Dr. Ramsey about cystic fibrosis and Kalydeco in a Q&A:

Q: What is cystic fibrosis, and what is it like for patients to live with this condition?

A:  Cystic fibrosis is a disease passed down through families that causes thick mucus to build up in the lungs, digestive tract and other areas of the body.  It is life-threatening and one of the most common chronic lung diseases in children and young adults.  Cystic fibrosis often ends up killing people in their late 30s or early 40s.

Q: How does this new drug, Kalydeco, work?

A: The drug targets the genetic defect and makes it work properly, gets the defect to do what it’s supposed to do.

Q: How would you describe this advance in medicine?

A:  It’s a huge development, and an entirely different treatment approach.  In the past, we’ve been very good at treating symptoms, making the quality of life much better but not treating the basic defect.  This is a totally different approach.

Q: What was the patient response in clinical trials for Kalydeco?

A:  Patients responded fairly quickly, within about two weeks. Their lung function improved and their coughing went down.  Patients with cystic fibrosis tend to get infections and often end up in the hospital, and that was markedly reduced. They described their quality of life as having improved, too.

Q: How does Kalydeco fit into the concept of “personalized medicine”?

A:  With the human genome being defined, we understand specific genetic mutations.  This medication directs a treatment to a very specific abnormal gene or protein.  And this is the way medicine is going to go as we move forward.  It’s incredibly rewarding to see that the concept of personalized medicine can actually pay off.  There’s been a lot of promise, but this shows it really can work.

Q: You were recently reunited with Rick Cissna, a former patient who you started treating at age 16, and who has now benefitted from Kalydeco.  What was it like to reconnect with him?

A:   I lost track of Rick when he left my care at age 21, and he just turned 50.  In the months before Kalydeco was approved, I was interviewed by KING 5 based on the positive clinical trials and published study.  Rick was also part of that story, but our segments were filmed separately.  My husband spotted him on TV and told me about it.  He was running in the segment – an incredible feat for someone with cystic fibrosis – and I was so happy that I started crying.  Rick likes to tease me about that, but seeing him doing so well is what makes the work that I do so rewarding.  My work in cystic fibrosis research is one of the most exciting things that I’ve been involved with in my career.   It’s wonderful to be able to make this impact on someone’s life.

Q: What’s next for you and Seattle Children’s in this line of research?

A:   Dr. Margaret Rosenfeld at Seattle Children’s Research Institute is the lead investigator for a new study using a pediatric formulation of Kalydeco for patients ranging in age from two to five years old.  She and other physicians will evaluate the safety and tolerability of the drug while also looking at measures of clinical activity like the effect on sweat chloride on the surface of the skin.