“He began to have difficulty breathing, he was sweating, and had a greyish-blueish color in his skin,” said Rachel. “He was also sleeping a lot more than he should have been, and it appeared he was using most of his energy to breathe. I knew something was not right.”

Ethan’s doctors hoped his heart would heal on its own in the first few months of life. That is what happened with Rachel’s condition which allowed her to live a life with minimal cardiovascular issues, although she still visited Seattle Children’s Hospital as a child for cardiac care.

But, at three months old, Ethan was not getting better. Doctors determined that if left untreated, Ethan’s heart failure would get worst. He needed a new heart, so he was transferred to Children’s from another local hospital to await his transplant. 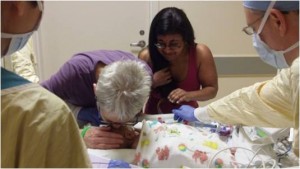 “During my own treatment at Children’s, my care team really became a second family to me,” said Rachel. “I received such great care, and I knew Children’s was the best place for Ethan to continue his treatment.”

On March 8, Ethan was placed on the heart transplant waiting list with the United Network for Organ Sharing (UNOS) , the group responsible for distributing organs in the United States.

In early April, while waiting for a heart, the outlet obstruction caused such extreme pressure on Ethan’s lungs, a surgery to palliate his obstruction was undertaken to help stabilize him.

51 days after being placed on the UNOS transplant list, on April 28, Ethan’s new heart arrived. The time between finding out about the new heart’s impending arrival and the surgery was only hours.

As Rachel and Ethan’s grandmother Sara quickly prepared to say good-bye to their baby boy before he was taken into the operating room for surgery, their own hearts ached. But at the same time, they optimistically looked forward to the day when Ethan would be able to go home and experience a young child’s typical milestones. 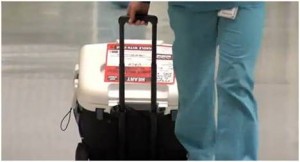 “This new heart means he’ll go to kindergarten. He may play baseball. He will be able to run and play like other children. Two months ago we weren’t sure we were ever going to have a baby to take home, and now he’s going to have a heart that will allow him to be as normal of a child as he can,” said Sara Cradduck, Ethan’s grandmother, who is also a nurse in the Neonatal Intensive Care Unit at a local hospital.

Ethan is currently recovering at Children’s and doing well.

“We expect he will be ready to go home in about 4-6 weeks  with his family, which is great news,” said Yuk Law, MD, a member of Ethan’s care team and director of the Cardiac Transplant and Heart Failure Service at Seattle Children’s Hospital.

Organ donation is so important. People don’t necessarily know how much goes into being a designated donor, and giving and receiving organs – there’s a lot that I didn’t know until Ethan’s need arose. It’s really opened my eyes,” said Rachel.

“To save a life through giving an organ is amazing. If you can give an organ to save a life, then  do it. Because to know that you’re doing that and to know that it’s for a good reason – it’s probably the best feeling in the world.”

Captions for photos above