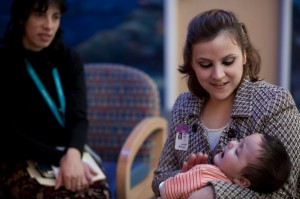 While many doctors in the U.S. have some ability to communicate in a foreign language, there are no standards that determine what degree of proficiency is required to communicate effectively with patients. Often, doctors are left to determine themselves whether they’re up to the task of discussing complex medical information in a foreign language. They may not be the best judges of their own abilities.

Using professional interpreters has been shown to improve doctor-patient communication and quality of care. However, in many medical settings, it’s still common practice for a patient’s family member or another bilingual medical staff member to step in to interpret, increasing the likelihood of miscommunication from interpretation errors.

Drs. Casey Lion and Beth Ebel of Seattle Children’s Research Institute and co-investigators set out to measure the impact of an objective evaluation of medical provider Spanish-language skills on self-reported language proficiency and comfort using Spanish in a range of clinical scenarios. Their study, Impact of Language Proficiency Testing on Provider Use of Spanish for Clinical Care, published online today in the AAP’s Pediatrics.

“We were concerned that providers were willing to use Spanish language skills for clinical care, even when they weren’t proficient, and especially concerned that they were doing so in scenarios that were medically and legally complex,” said Dr. Lion.

Drs. Lion and Ebel hypothesized that providers with lower levels of Spanish proficiency would be reluctant to deliver care in Spanish after objective feedback on language proficiency, particularly in situations with complex medical and legal implications.

They enrolled 78 pediatric residents from three residency programs throughout the U.S.: University of Washington/Seattle Children’s Hospital (Seattle, WA), Johns Hopkins School of Medicine (Baltimore, MD), and Children’s Mercy Hospitals and Clinics (Kansas City, MO).  Residents completed a baseline survey rating their ability to speak about health and pediatric medicine in Spanish. After the baseline survey, each participant took a standardized, oral proficiency test. After receiving the score from the standardized test, they completed a follow-up survey to reassess their spoken Spanish proficiency and comfort using Spanish in clinical scenarios. Participants were asked if the test altered their general comfort level in speaking Spanish with patients and families.

Based on these results, the researchers concluded that testing decreased non-proficient residents’ comfort with using Spanish in straightforward clinical scenarios, but testing didn’t change comfort levels in more complex or legal scenarios.  Therefore, language testing may play a major role in decreasing non-proficient Spanish use and improving care for patients with limited English proficiency, especially if coupled with clear policies and easy access to professional interpreters.

Casey Lion, MD, MPH is an attending physician in General Pediatrics at Seattle Children’s Hospital and a quality of care research fellow in the Department of Pediatrics at the University of Washington School of Medicine. Dr. Lion is a member of the Academic Pediatric Association and the American Academy of Pediatrics, and has a research interest in measuring and improving the quality of care for disadvantaged and vulnerable children.

Beth E. Ebel, MD, MSc, MPH is the director of the Harborview Injury Prevention and Research Center, a multidisciplinary research institute encompassing the fields of pediatrics, surgery, biostatistics, epidemiology, psychiatry, trauma care and social work, nursing, and health economics. Dr. Ebel is also an associate professor in the Department of Pediatrics at the University of Washington School of Medicine and a researcher in the Center for Child Health, Behavior and Development at Seattle Children’s Research Institute. This research was funded by a grant to Dr. Ebel from the Robert Wood Johnson Foundation.

Seattle Children’s provide interpretation free of charge to patients and families who feel that they need help communicating in English. We do not allow relatives to provide interpretation because they may not have the technical knowledge required to interpret medical information and are not trained as interpreters. Our medical interpreters facilitate communication between patients, families and providers. Interpreters are available 24 hours a day, seven days a week.  Telephonic interpretation is available in more than 150 languages and dialects.  Each month, Seattle Children’s staff members make approximately 6,000 to 7,000 requests for in-person or phone interpreters to ensure that accurate information is exchanged and to provide timely care in a culturally sensitive fashion.

If you’d like to arrange an interview with Drs. Lion or Ebel, please contact Children’s PR team at 206-987-4500 or press@seattlechildrens.org.