As a medical resident, Dr. Ben Wilfond remembers working with a family whose baby had trisomy 21 (down syndrome).  He was with the physician when she first talked with the family about their new baby.  “She walked in, introduced herself, and the next thing she said was, ‘Congratulations on your baby,'” Wilfond said. The remark took him by surprise.  “As a resident, I could see the problems this child was having and I knew some of what was ahead for this family.  But the doctor did not deprive them of their celebration, and she chose not to focus on the fact that the child had a disability.”

This situation isn’t always the norm. Dr. Wilfond is a co-author of a new study published in Pediatrics that found parents with children with trisomy 13 and 18 have challenging encounters with health providers.  Children born with trisomy 13 and 18 have low survival rates and survivors have significant disabilities.  They have traditionally been treated with palliative care.

The study also found that parents who belong to social networks report an enriching family experience and describe surviving children as happy.  Close to 100 percent of parents whose children were still living, with a median age of four years, described their child as a happy child.

“Doctors and healthcare providers often have very negative views of trisomy 13 and 18,” said Dr. Wilfond.  “One thing that we learned in this study is that parents talk with similar families on Internet support groups, and the experience of families is much more diverse than what doctors initially perceive.”

Mildred Bay initially found some solace and information via social networks.  A pediatrician by trade, Dr. Bay was a resident at Seattle Children’s and now works at Peninsula Children’s Clinic.  Her daughter, Lucy, 3 and one-half months old, has trisomy 18.  Dr. Bay said hearing that diagnosis was a complete shock.  “I had a patient who had trisomy 18 and who died after two weeks of life, about a year prior,” she said.  “So I had gone through that process with that family:  The shock of diagnosis, the intensity of taking care of the baby, and the baby dying at home.  The whole situation was more familiar than what I would have liked.” 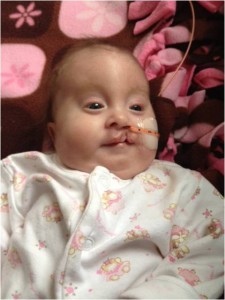 Dr. Bay connected with a patient family she knew through Caring Bridge and, subsequently, made contact with other people and families.  “I would look at various blogs and websites, and learn about what other families’ experiences were like.”  Many families have very intense but ultimately very positive experiences with their children despite the diagnosis, she found.  “As a pediatrician, and having worked at Seattle Children’s, I knew kids with complex medical issues.  The road is hard, but not unmanageable if you have the right support.”

Families without firsthand medical insight can gain courage from websites, and can piece together a good plan for their child, too.  But Dr. Bay said that it’s also important to find a doctor who will support you.  “Try to find a physician who says, ‘I want to be your child’s doctor,’” she said.  “There are not enough doctors who are comfortable enough to say that, and that made all the difference.”

Dr. Meg Vernon, a cardiologist at Seattle Children’s, stepped forward for the Bay family, and asked if she could be Lucy’s physician.  “That’s what I needed, for someone to say I want to help you,” said Dr. Bay.  “Everyone’s situation will be unique.  But at least there is not that fear of or question of how we tackle this.”

Dr. Wilfond and other renowed local and national bioethics experts will kick off the Eighth Annual Pediatric Bioethics Conference Friday, July 27, at Bell Harbor International Conference Center in Seattle, Wash.  Topics covered include “Doctors as Political Advocates,” “Regaining a Trusted Relationship in the Time of Twitter: Doctors and Patients in the Blogosphere,” “Conscientious Objection in Pediatrics,” and “Parental Refusals of Immunization.” The conference continues Saturday, July 28.

Not based in Seattle? Sessions from the conference will be webcast and available for viewing at a later date.  The conference is presented by Treuman Katz Center for Bioethics at Seattle Children’s Research Institute.